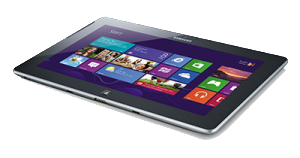 The Apple iPad and Android tablets have dominated the tablet market for years, but the Windows tablet category is growing and several models like the Microsoft Windows Surface have excellent reviews.  Because most Windows tablets run the Windows operating system (Windows 8.1 and 10), anybody who has ever used a Windows PC will be very comfortable using a Windows tablet.

Like Android tablets, there are numerous manufacturers of Windows tablets.  MacPC Market carries a selection of “hybrid” tablet/notebooks, also called a “2-in-1”, like the Lenovo Yoga, Toshiba Radius and others. MacPC Market does not carry any of the previous generation Surface tablets that run the Windows RT operating system.

When most people think of shopping for a tablet, chances are the iPad or Android tablets are the first to come to mind. However, if you plan on using your tablet for work, a Windows tablet may be a better solution.