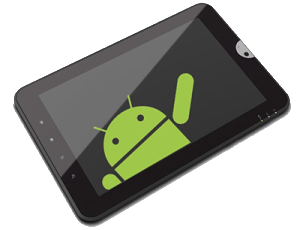 Unlike Apple’s iPad tablet series, there are numerous manufacturers that make “Android” tablets.  Android is an operating system for mobile phones and tablets just like PCs run Microsoft Windows as their operating system.  Picking the right Android tablet can be somewhat intimidating, but MacPC Market can help you navigate through your choices.  MacPC Market carries Android tablets from several manufacturers including the Samsung Galaxy tablet, the Amazon Fire, and others.

Developed by Google, Android is an open source operating system, meaning that manufacturers don’t have to pay Google to use it.  Because of this, it’s used in a wide range of hardware varying in price from small inexpensive tablets and phones to large-screen high-end devices.  Even Amazon’s Kindle Fire tablets run a customized version of the Android operating system.  If you already have an Android smartphone, you will be very familiar with how most Android tablets operate.

Essentially, if you like Google services, Android is a good choice for you. While the majority of these services are also available on Apple’s iPad and other platforms, the integration is smoothest on Android.

Android also boasts support for multiple user logins, which is especially useful if you want a tablet for everyone in your family to share. This is a major feature that is not available in iPad tablets.  Just like a regular computer, each member in your family can have a separate login with a different desktop customized to your preferences.