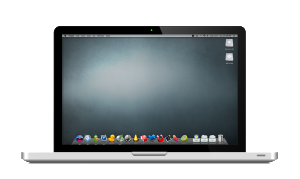 The MacBook Pro, which is sometimes abbreviated to MBP, is the Macintosh laptop originally introduced in January 2006 and was the first Apple notebook sold with Intel processors.  The MacBook Pro is now in its third generation. It is the top of the line model of the MacBook family and is available in 13 and 15-inch screens. A 17-inch version was manufactured until 2012.

While there are numerous differences between models, the MacBook Pro series can be divided into three basic groups:  pre-Unibody, Unibody, and Retina.

MacPC Market carries inventory of the Unibody and Retina models of the MacBook pro in both 13 and 15-inch models.  However, we do service all models of MacBook Pro.  The previous generation Unibody still retains a very similar appearance to the Retina models.  When a Unibody model is combined with an upgraded solid-state drive (SSD), the performance will be similar to the Retina model. MacPC Market sells refurbished MacBook Pro laptops that are as much as 50% less (or more) over the retail price of the newest models.

Are you ready to purchase a MacBook Air from MacPC Market?  Do you have additional questions?  Come by and visit our Cleveland, TN store, give us a call, or shoot us a message.

More information about the MacBook Pro

The first generation MacBook Pro looked very similar to Apple’s PowerBook G4.  The main difference being the MacBook Pro was equipped with an Intel Core processor instead of PowerPC G4 chips. The 15-inch model was introduced first in January 2006 and then later in April the 17-inch model was introduced. Both models received several updates and were upgraded to Core 2 Duo processors later that year.

The MacBook Pro second generation, commonly referred to as the “unibody” model, has a tapered case made from a single block of aluminum. It was announced in 2008 as the 15-inch MacBook Pro and the 13-inch aluminum unibody MacBook. In January 2009 Apple introduced the 17-inch model. In June of that year Apple also discontinued the non-Pro unibody 13″ Macbook to the general public but continued to manufacture and sell it to schools through 2011. Later updates/revisions introduced upgraded Intel Core i5 and i7 processors and also Intel’s Thunderbolt technology.